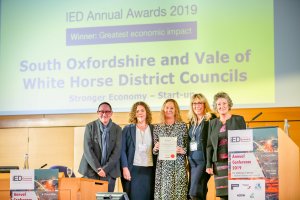 The South and Vale Business Support team at South Oxfordshire and Vale of White Horse District Councils is celebrating after winning an important national award.

The team was presented with the Institute of Economic Development 2019 Greatest Economic Impact Award a national conference in recognition of the councils' successful 'Stronger Economy – Start-Up' initiative, which stimulated the local economy by supporting 87 new businesses to start up in just 18 months. This was achieved by holding practical workshops in Didcot, Faringdon, Berinsfield and Shrivenham.

The team was praised by Sir Howard Bernstein, IED Patron, and Bev Hurley, Chair of the Institute, for attending each business workshop to raise awareness of the councils' support and to provide general reassurance to people thinking of starting their own enterprise. Residents attending said they felt encouraged knowing the councils' team is available to support their business growth and help signpost them to new opportunities.

Cllr Emily Smith, Leader of Vale of White Horse District Council, said: "I feel extremely proud of the whole team – they've worked very hard to support the thousands of small businesses in our districts and I'm really pleased they've received some deserved recognition for all their efforts."

Cllr Sue Cooper, Leader of South Oxfordshire District Council, said: "I'm delighted our team has won this national award. Despite the economic uncertainty in recent years, the team has helped support the creation of new opportunities and jobs for our residents, which helps ensure our local economy continues to prosper."

IED Chair Bev Hurley said: "We would like to congratulate South Oxfordshire and Vale of White Horse District Councils on winning our Greatest Economic Impact award for 2019. In previous years a select of transport schemes have won this category. This year, however, we have selected a grass-roots project where we were particularly struck by the economic return, the delivery of the service and the completeness of their impact analysis. The project provided free business advice to organisations over one week and was provided in local towns to help prevent economic shocks derailing the economy."

The 'Stronger Economy – Start-Up' campaign is just one of the many projects from the council's Business and Innovation Strategy Action Plan 2016-2020, which highlights the importance of encouraging new business to be created, increasing business resilience to economic shocks, and boosting productivity.